A big flood in Napal

We went back to Kharapani again on May 10th.
The day before, we went there by a helicopter, but this time we went by a four wheel drive car. We had not been able to investigate well other villages the day before ,so this time, we tried to check other villages on the way to Khrapaani.

We first visited Bhurjung Khola village about 4km from Khrapani. A woman working at a restaurant told us ,"It was a terrible noise at the time of the flood. I climbed on the roof and saw in the river water rushing as if jumping in the air. I also heard screams here and there. In this village,still 26people are missing, because there were many people collecting sand and pebbles in the river to protect the banks of the river."
And she introduced us to Bezi Rai aged 16. 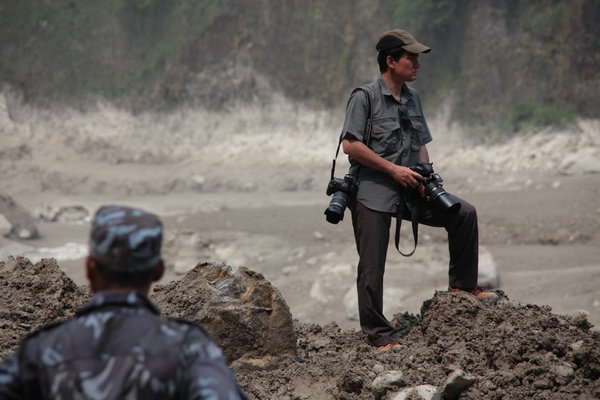 He was collecting pebbles and sand in the river with his grand mother ,aunt and a brother
He said; "Suddenly a terrible sound came as if an airplane was coming.
We were all very surprised and looked around us. And we saw water was coming to us as if the earth itself was tumbling on us. At first we tried to escape together hand in hand ,but grad-ma ,aunt could not keep pace with me. So I left them and ran with the brother and when I looked back I saw them in the water."

And he added;" Later I went to the hospital of Gandaki in Pokhara, but could not find my grand -ma and aunt ,although we saw many bodies without head or limbs. I also found one of my good friend was also swept away."

The glacier which collapsed
.
We left he and went to Kharapani.
At the gate of the village, there were soldiers and police-men forbidding the entry beyond the rope.
The village, which had been ghostly quiet the day before was all in commotion with many soldiers. There were many machines digging the mad.
On the tent at the gate of the village, a paper was attached with names of the victims . Many people were trying to read the paper. They must be relatives of the victims.
Their face showed tensions and despair as well as helplessness. 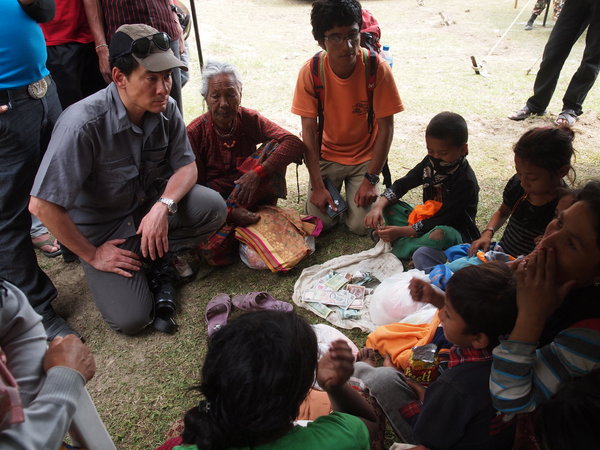 We smelled a corruption smell

Also terrible smell was hanging around .
Soldiers told us "Bodies are decomposing. The more we dig ,the smell becomes stronger "

We got a permit from soldiers and policemen to enter the area.
We saw shoes ,kichen utensils ,school books and so on digged out of the earth. 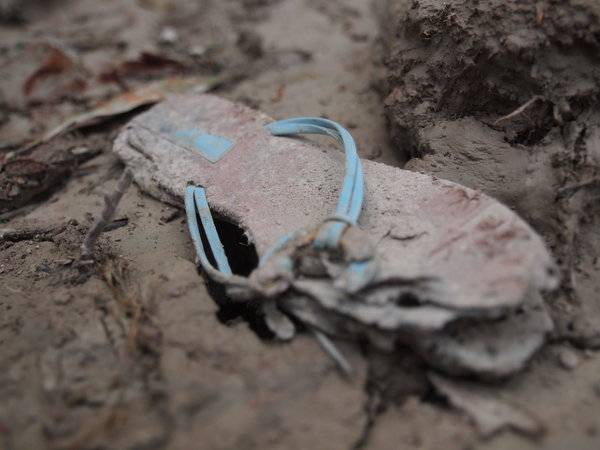 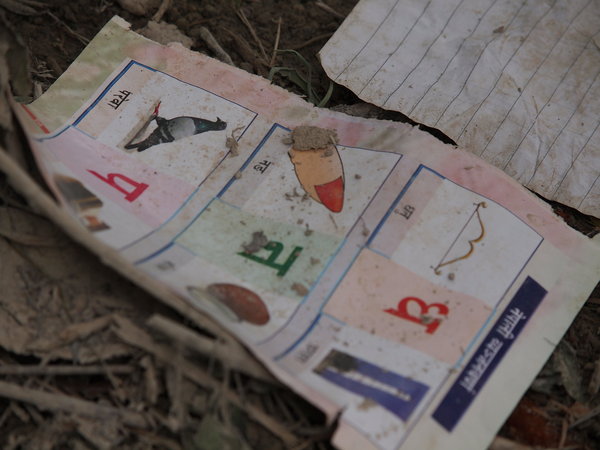 A villager krsna bahadoru aged 41 told us ;
" Two days before the flood, water in the river decreased and became whitish in colour"
A Neplese journalist who was there told us " It was perhaps because of the collapsing glacier of the Mt Annnapurna temporarily blocked the water of the Seti river "

When we were collecting eye-witness' s words,many villagers gathered around us ,
telling us,"Politicians came in helicopters but immediately left us!", "They never listened to our please ", "We are restauring the hanging bridge by ourselves,if we leave it to politicians ,it might take 5to 6years"
So many complaints against the government one after another !

One of the story they told us
"When the flood came ,a high -school girl was just crossing the bridge. She went to the entrance exam of the university at Pokhara and just returning home.
When the flood attacked the bridge, she could not move, maybe because of fright.
The flood came on top of the bridge as if a cascade. The Bridge was gone and so was the girl,"
We saw a man ,perhaps her relative or her boy-friend who was sitting at the site of the bridge without a voice.
We thought of speaking to him,but could not .
We were all not in a situation to speak to him .

A corpse was put in a tent

Also, they told us that about 30 tickets had been sold to the hot spring bath.
It means just that number of people were in the bath at the time of disaster.
They say because the villagers are not required to buy tickets ,and accordingly, many more people would have been perished .
They said;
"Two buses which carried the hikers ,together with people ,were washed away"
"Normally, even on week days about 500 people visit here a day. Over the week -end ,sometimes 1000 people come here and the flood came on the Saturday.
A Nepalese journalist said to himself "Victim must at least be over 100"

In the army tent there were many women and children.
Santi Gurung told us ;
"I was working in the field and saw the flood coming ,so I escaped to the hill. But my husband and my father were at the river and just were swept away .Without my father and my husband ,how I can feed my children ? "
She looked just tired and lost.

The hot spring which was photo at Kharapani in last October. There was bridge behind.

Hot spring before the flood

A notice board was elected at the gate of the village while we were at the village.
Photos of bodies found were pasted ,some without heads or limbs or the inflated bodies .
Many people came from Pokhara and near- by villages ,so there were quite a throng in front of these photos .
They started to take out their purses and give donations.

With heavy heart , I started to walk and came to the army camp.
There, a head of a woman found at the bank of the river, had been carried to and displayed . Many people gathered in front of the head to know whether she was their relative.
It was a horrible scene; a head was displayed along the road and so many people in front!
But the reality was simply such a horror happened.

People to see the list of the missing person

The photograph of the corpse was put on the bulletin board

At the village,some Nepalese journalists noticed my presence and started asking questions .
"Why a mountain climber like you is here ?"

I tried to convey to them;
"On my part, I tried my best to convey to the world the danger of possible collapse of glacier lakes caused by warming of the earth through G8 summit of Toyako of Hokkaido
or Pan Pacific summit meetings. This disaster we are witnessing today is really what I had been warning.
But ,I felt that ,when the summit meeting was over ,world's interest in the problem dissipated. I felt how difficult it is to convey the possible danger and keep our interst of the danger.
After the financial crisis in the world as a whole, and in case of Japan, after last year's disaster, people's interest in the question of warming of the earth declined so much.
But just here at Kharapani more than one hundred people have perished.
Collapse of other glacier lakes would follow inevitably.
We cannot give up to convey the horror of the tragedy.
We must do something so that a second or third Kharapani will never happen again"

And I continued ;
" We must take all the measures to combat warming of the earth and at the same time
start training for possible evacuation of villagers in case of sudden flood.
Maybe it is too much for the Nepalese government to do all alone. The Nepalese government must ask cooperation from the world .
For example, Japan has a long history of cooperation for evacuation of water related disasters in Bangladesh.
Preparing shelters is one of useful measures.
With all these efforts, victims of water related disasters were reduced dramatically there .
We must expect that ,because of warming of the earth, glaciers of the Himalayas would melt and would cause various disasters.
How to protect human lives against such disasters is our big challenge. For that ,we must make our bitter experience of lessons Kharapani or the future. And never repeat the same mistakes.

Honestly ,I must confess that, after G8 summit of Toyako and Pan Pacific summit,
my attention went away somewhat from the problem of glaciers.
It is really difficult to keep always a very acute sense of crisis!

Ken Noguchi in response to an interview

The Nepalese government announced that 18 people were dead and 30 others were missing in the village. Good heavens! No.
Everybody who visited the village must have the same feeling ...distrust of the official figure.

A big flood in Napal