A big flood in Napal Ⅰ ～ Lost village with a bang ！～

A big flood in Nepal

A big flood in Napal Ⅰ ～ Lost village with a bang ！～

A helicopter arrived in manang from Katmandu. We got in the helicopter and skirted around mountain-ranges of Annnapurna and went to the river Seti.
The river Seti、even from far above, was visibly deeply ravaged and cut on both banks .
We went to the village of Kharapani ,which was thought to be most seriously affected.

They say this village of Kharapani、with hot-springs and some picnic courses ,was very popular with foreign trekkers as well as with Nepalese.
But we could not find the village from air. Finally, the pilot indicated "That is here!"
We landed on a hill and reached the place, but there was nothing ! Everything was covered by sands and pebbles.
We could not go quickly, because it was very swampy with boots going deep each step.
We asked a soldier near-by " Where is Kharapani?"He simply pointed the ground and said " down under"

There was a village here 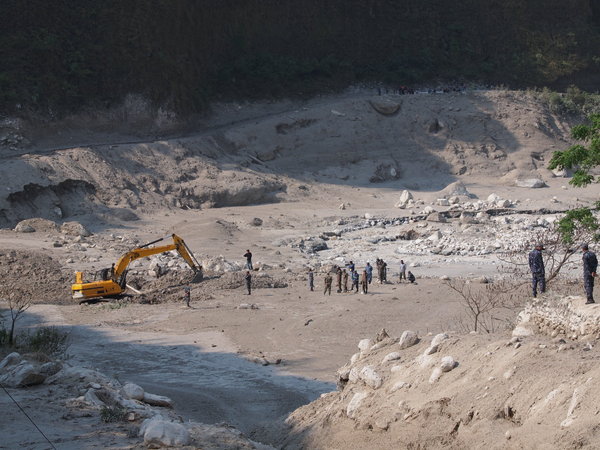 The village was gone.

There was a buffalo near-by who could not move.
We could not believe there had been a village here before, we stayed stupefied for some time.
We had imagined broken houses here and there! But there was absolutely nothing !
There were very few rescuers; just about ten soldiers without knowing what to do.

A buffalo who could not move

We were stunned, but we found a young man who looked dazed and so we tried to speak with him.
He was Kumari Gurung、aged 34, and he told us that a house belonging to his brother was in the village.
He could hardly speak , but managed to tell us that his brother was working in Saudi Arabia and that his wife and a baby who was just 3 years old were in the village.
He said ,"when the flood came ,I was in a village on the hill .I could see the flood coming with terrible noise. I called the wife of my brother to flee at once by my cellular phone but I could not talk to her . And the village disappeared with terrible noise. I could not do anything but just to watch."
"I called my brother in Saudi Arabia and told him that his family disappeared with the Village of Kharapani. There was no reply from him, too much shock must have deprived his voice"

There had been 5 hotels and some houses. I heard that there were some foreigners staying at the hotels. Also there were quite a few people enjoying picnic because it was
Saturday .I don't know how many people are buried but I presume at least 50 people.

When we came back at our helicopter, several women were standing near-by stunned. We could not speak to them.
The same scene which I had observed just after 3.11in Japan was there!

It was not confirmed, but there was an information that glacier of N04 peak of collapsed.
So we left the village by the helicopter and moved to Pokhara
We try tomorrow to reach the Khrapani over the land tomorrow .

A big flood in Nepal